Power Supply is a bit of a misnomer…there are actually several power supplies in this machine, all fed from the 20A 120V twist-lock connector mounted on the side of the unit. From here, AC is routed to an isolation transformer that feeds the Flexowriter, and AC to the sequencer unit (see that section for details). When the LGP-30 is switched on, a relay closes that powers up the ventilation blower motor, AC to a massive Sola constant voltage transformer that feeds filament transformers distributed about the machine, and after a timed delay, AC power to the magnetic drum and to the power supply chassis proper. It is this chassis that supplies +150V at 2A, +160V at 1/3A and -160V at 1.8A to the logic units. The only fuses in the machine are for the isolated 120V power to the Flexowriter. A Silic-O-Netic relay in the Sequencer will drop out if current becomes excessive.

Jan 21/22
The massive PS chassis was slid out of the frame for inspection. Hidden beneath the steel box cover that supports the air filters, nothing looked out of the ordinary (no bulging or leaking caps, no damaged wiring), though a couple of the large (pop-can sized) capacitors had been replaced somewhere along the line (late 60’s?) as they were smaller diameter than the original mounting rings. The reason for the weight (the entire assembly must weigh 90+ lbs) is that each chassis has a Sola constant-voltage transformer that will operate with an input from 100 to 130VAC.

Sunday was the busy day. I gave each PS chassis a scrub down and brought each up on the workbench unloaded. No sparks or other fireworks to report. I then loaded each with a resistance load and let run for a half hour. No warm caps, steady DC output, all within 5% of rated. The selenium rectifier stacks are actually germanium rectifier stacks (with GE part numbers) which should prove a little more reliable. The base mounting plate with studs was cleaned up and a Sola stamp was found, so this may have been contracted out to Sola as a complete assembly. 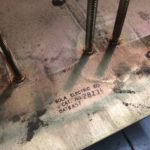 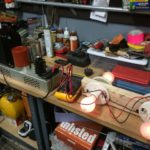 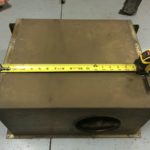 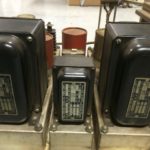 While the supplies were cooking, I started the scrub down on the frame. The freight trip had loosened up a lot of hardware, including the mounting screws for the steel plate that encloses the bottom of the unit. I went about snugging up nuts and bolts and replacing those that were missing. I pulled the “digital display” unit which contains the sweep and power transformers for the scope display and gave it an external cleaning. I could see no individual parts within other than a couple transformers that looked clean and the four control pots on the front.

With power supplies ready, I bolted them back down and cleaned the supply housing inside and out. This steel housing (roughly 18”x20”) has filter slides on three sides and the fourth contains the circular coupling to the blower motor. The idea is fresh air is pulled in through the filters, passes over the hot supply components, is drawn into the blower and pushed out through the vacuum tube modules from the card end outward. Very clever.

Taking measurements from the filter slides, I cut down my new oversize filters to fit exactly, used a little glue and tape and slid them into place to cure. Scrubbing continued on the rest of the frame and other components.

Some frame findings: It’s clear the massive power supply chassis had been removed a time or two, and the scrapes underneath revealed green paint under the brown/gold surface. At the front right corner of the frame I found the stamp #187. The side panels that had likely been removed during refurb and marked so as to find their way back, had #393 written on the inside in black marker, but the one panel also had an old piece of masking tape with the number 162 (152?). Hmm.

Feb 9:
With power supplies ready to go I figured I was on easy-street. Not so. I was replacing wire harness clamps when I decided to investigate the j-box where the 120V power comes into the machine. I think it’s safe to say I now know this unit inside and out. Imagine my surprise when I pulled the plate for inspection…. Looks like a ‘thermal event’ happened at some point. I pulled the wire caps for further scrutiny, and surprise! Aluminum wiring. Fortunately, the Hubbell twist-lock unit is okay, but this box has to get changed and the wiring re-done. Notice anything odd about that box? It’s the mounting ears. So far, the search has been fruitless. 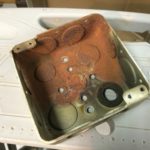 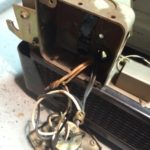 Mar 11:
With no luck in finding a correct box, I modified a standard 4″ box to accept the cover and cleaned up the individual connector components. This’ll get reinstalled once a 3/4″ rubber grommet shows up to replace the old 1/2″ one.

In other news, I had to pull out the power supply chassis after the scope showed a noisy 150V supply. Sure enough, one of the 3000 MFD caps was bad, but my replacements were too tall. However, I did change out the 1500 MFD caps in the other chassis as a precaution. It had been obvious from the first go-round that these caps were replaced during the machine’s refurb. What I thought was some sort of adhesive tape (used as a spacer for the newer, smaller caps) was actually punch tape! Finding nothing else suitable, I also grabbed a roll of 5-level tape and added that to the 6-level stuff for the even smaller diameter replacements. New 3000 MFD caps are on order, hopefully they get here by next weekend. 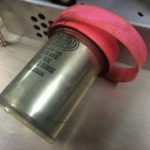 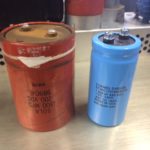 Mar Update:
The new caps arrived and the recap job is complete. I also found a few connection points under the chassis that were too close for comfort to the under-chassis transformers (too close from day-one, but we’re talking major current here with old wiring) so made a few mounting adjustments. With that, the 100+ pound assembly was put back into service and we have rock-solid DC power and a stable CRT display! 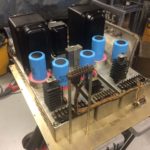