The first order of business was making sure all parts that should move, did move. No stranger to a Flexowriter, I set the unit on its rear service legs and flipped down the encoding rack for inspection. All parts were present and nothing appeared damaged or out of order. I hand cycled through the tripped key levers and pulled the power roll. Interestingly, this unit uses a chain drive(!) to power the tape reader. Also, customized to the LGP-30, it uses 6-level encoding, features a ribbon color change feature, and has both upper and lower cases. The unit also has a wider than standard carriage, half-line platen spacing (presumably for sub and superscripts) and the top row of keys eschew the standard typewriter symbols for mathematically oriented ones, such as delta and pi.

After oiling, greasing, and working the primary parts loose, the machine came to life. Easier said than done, since the motor uses a start winding and will blow its 2A fuse if the speed doesn’t come up right away due to drag or cold temps (it’s January in Iowa…it’s cold). Unlike other Flexo’s I have, this one would fire correctly on all keys, though a few are a little ‘weak’ on impact. Attempting to punch and then read back a tape caused some head scratching until I realized somebody had loaded the unit with 5-level width tape. At first, I figured this may have been done for display purposes, but after making up a strip of 7/8″ width tape to try, I found the leftmost (#6) punch not working. Since the LGP-30 is normally loaded 4-bits at a time using the middle 4 punches, you could skate by like this. Of course, what it would print while loading would be gibberish. And 5-level tape is a heck of a lot easier to find than the 7/8″ stuff.

The issue appears to be electrical in nature, but more investigation is required. In the meantime, I was able to buy a case of 7/8” tape, and put in an order for replacement 0.25uF snubber caps used throughout the Flexo. A fresh ribbon was ordered, too. 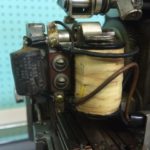 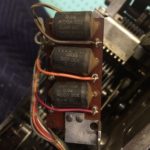 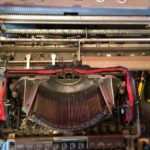 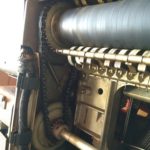 Jan 9 Update: History and an A Ha! Moment
After some detective work, it seems Underhill (the firm that had the machine post-refurb) utilized a Telex machine to send and receive engineering data remotely from the field. They would then feed this data into the LGP-30, punch the results, and send the data back to the field. Pretty slick! The article photo showed an ASR-32 Teletype machine. Bingo! They had intentionally defeated the leftmost punch on the Flexo so they could use 5-level TTY tape. Since the reader uses a small toothed guide wheel at the read head, you could feed the Flexo with narrower tape and it would track without modification.

Jan 12: What Code is This?
The drum belt and bulk capacitor order have arrived, looks like this weekend will be spent with the soldering iron. The other big news this evening concerns the Flexowriter. With a fresh ribbon wound onto to the Flexo-specific spools, we have good print from all of the keys and all mechanical systems are working (carriage return, tab, backspace, color change, upper/lower case and ribbon take-up)! Additional time spent with my meter on the dozens and dozens of unmarked, bundled, black wires revealed the #6 no-punch issue to be a problem at the punch itself. Turns out the supply terminal for #6 was removed and taped back, but done so in an almost undetectable way. The coil connection was still where it was supposed to be (why not just move it to a ground connection and avoid the pulling and taping?). With that resolved, I now had #6 working.

But the surprises continue….. The letters I punched to tape were not the letters that were read back. A quick check of the reader showed it was behaving correctly. Had the order of the punches been changed? Comparing in vs. out, even the number of 1’s per group could be different so that wasn’t the case. What was going on? 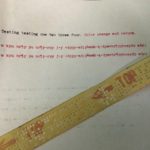 Turns out (as mentioned in the Ah Ha! posting), not only had #6 been defeated, but the keyboard had been recoded to ITA2, US TTY code! Thinking this through, the Flexowriter punches/reads tape (L to R) as 612345. Data from the field received on the Telex would be punched 12345. Assuming the computer had been loaded with a lookup table to convert ITA2 numeric codes to its language, you still have the problem with digits like 1 and 7, which can only be differentiated by bit 5. But the LGP only digests data in groups of 4 unless manually set. I guess further study is required here.

Things get a lot easier when the computer is ready to punch results. The computer instructs the keyboard according to the 6-bit code it knows. The encoder in the Flexo translates this to 5-level TTY and the tape is ready to go straight to the Telex machine. What appears on the Flexo ‘print unit’ is gibberish, but a small price to pay, and the Telex will print it correctly. The trick here will be recoding the keys back to Flexo code. In theory, not that difficult, but I’ve never attempted it before.

Jan 14: Flexo Recoding
The encoding unit of the Flexowriter (Code Selector) contains 51 sliding bars (aka Permutation Bars) numbered from left to right; each corresponds to a key on the keyboard. A set of bails, each having its own set of contacts, runs horizontally and closes a circuit whenever it encounters a cam in that position on the slider bar. There are actually two banks of bails, an upper and lower. The lower correspond to the punch, the upper correspond to input to the computer. Recoding these sliders took me anywhere from 4-6 hours and required lots of checking and rechecking to move the cams around with pliers and to get them to perfectly seat. While doing so, and carefully marking sliders and positions with a pencil, I came across similar pencil marks from the guy that had sat down 50 years ago and performed the exact same task in reverse. That makes you think….

Lots of photos prior to disassembly helped, but I ended up in a situation that even pictures couldn’t resolve. I noticed that the sliders corresponding to Flexo ‘codes’, that is, non-alphanumeric in nature, had no cams on the top row. This included Shift, Ribbon Color Change, Tab, etc. Was this factory correct, or were the cams removed during recoding? I took photos and sent a message to Christian Corti for verification as only an LGP-30 Flexowriter would have the proper code. Friden and Librascope service lit was silent on the matter. Meanwhile, I now have consistent 6-level punching and am awaiting a case of correct paper tape to arrive. 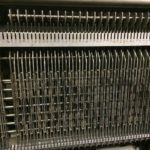 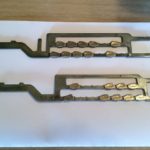 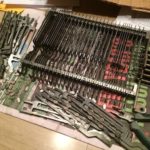 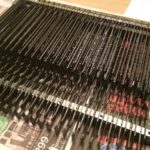 And still there’s more….
The paper tape stock arrived in the evening and I could finally run some proofing tests on the Flexowriter. I found I still had some erratic ‘playback’ and it was due to a sticky escapement. There’s literally an automotive-style grease zerk at the end of this escapement and forcing in fresh grease and letting it run for a while appears to have cleared things up.

The original cord to power the Flexo separate from the computer also needed some TLC. The rubber was hard and there was practically no strain relief at the Flexo side. The LGP-30 Flexowriters were custom built with beautiful 37-pin Cannon twist-lock connectors, and these alone are selling in the ballpark of $100 without pins. Luckily, there was no internal damage and I fitted up a new cord and used a section of 3/8 hose to reduce the opening down to a compressible size. Works well and looks completely stock. 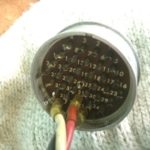 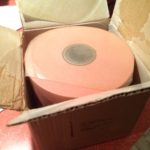 Jan 18: Flexo Operational
Confirmation arrived from Christian Corti that the Flexo control-code functions are not read by the LGP-30, just the alphanumerics, thus confirming no cams set on the top of those sliders. I don’t see a technical reason why that decision was made, but will leave it be for now. The idea here is to get the Flexo as close to functionally and technically correct as possible so I don’t find myself fighting a computer problem that’s really a Flexo problem.

After a little more tweaking and chasing some intermittents, the Flexo is now functioning 100%. Dare I put all the shields back on? 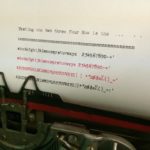 Update: I jinxed myself on yesterday’s threat to put the covers and shields back on the Flexo. While tape punching and typing are working 100%, the reader began to go intermittent. At first, this was attributed to a couple of permutation bars hanging up, but I noticed the situation got worse as time went on. I let things cool and we were good for another couple of tape reads. Seems I can’t catch a break on this Flexo.

Weekend of Jan 21/22
Finally, the Flexowriter is complete and fully functional from both a cold start and when hot. What had happened was that the coil that would trip the clutch for the keyboard selector would expand a thousandth or so when hot and not always trip the clutch reliably. The reader would continue to run but the keyboard ‘wouldn’t get the message’.  A quarter turn of the screw adjustment and we were back in business.

Feb 10: The Flexowriter was mated to the LGP-30 and is still working great. While the computer is not yet functional, there is communication between the two. Definitely a good sign.

Click here for a video of it running an exercise tape.