The Control Panel interfaces primarily with the sequencing unit and provides the Power On/Off signals to bring the computer up or put it in Standby. It also has three modes of operation- Normal, Single Instruction and Manual Input. Power for the panel lights comes from the sequencer, and the mode push buttons are physically interlocked and electrically connected to illuminate only those functions permissible when selected. The bottom row of buttons are the ‘sense switches’ polled by software.

Weekend Jan 7/8, 2017:
The control panel is a real work of art, and it’s assembled like a piece of military-grade gear. All screws are hex key fasteners of various head size and lengths with lock washers. The front panel is cast aluminum and the interior structure is all aluminum stock. There are a total of 24 lamps operating at 6.3V and some of these had burnt out. I imagine the usual trick was to pop off the clear ‘key top’ of the offending unit and remove the bulb with a small rubber extension (too tight for fingers). In theory, the key top is designed to snap back into place, but will only do so if the interior mating parts are perfectly aligned, and that takes some delicate work from front AND back. I suspect this is why several key tops have broken pieces near their base (not visible when installed), and one key top was broken in two and fixed with scotch tape years ago.

I carefully disassembled the panel and cleaned all of the key tops in warm soapy water. Meanwhile, the interior legend tiles were carefully cleaned and set aside. Two of the key tops look much newer than the others and are possibly from the refurb. An internet search for replacements turned up nothing, so the broken top was carefully glued on its sides where it wouldn’t be visible, and moved to one of the least used functions.

Of the 24 bulbs, I found a mix of #44, #47 and #755. The original schematics make no callout for the bulb type, and there was no clear pattern of which were original, but I decided to err on the side of lower current consumption due to the age of the wiring and sockets and ordered replacement #755’s for the majority of functions. I moved the 2 watt #44s to the buttons with colored backgrounds.

The top row of buttons are mechanically interlocked with regards to Standby/Operate, and again with Manual/One Instr/Normal. These got cleaned and greased and reassembled. After polishing the aluminum button dividers and cleaning out all the dust, the panel was ready for reassembly with the most used functions receiving the most structurally sound tops. While waiting for the box of 755’s to complete the bottom row, I moved on to the Flexowriter. 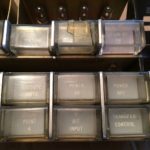 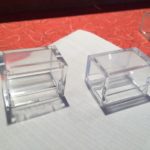 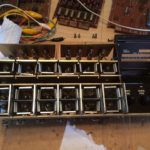 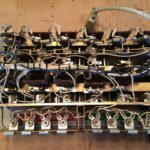 Jan 9: Panel Wrap-Up
The #755 bulbs arrived and I completed the re-lamping and assembly of the control panel. It’s ready to be put back into service. While we’re on the topic, the literature I’m finding makes reference to lights or buttons that seemed to have been renamed after the materials were printed. I’ve found at one point the “STOP” light was called “Blocked State”. I also see there were two versions of the panel. The one my machine has with the cast aluminum bezel and large buttons, and the smaller-buttoned with aluminum diamond sheet trim, as seen on the Stuttgart machine. The German firm “Schoppe and Faeser’ were licensed to build copies and perhaps this panel is an attribute of those machines (along with other specific trim, like the vent guard designs at the base). Page 9 of this Brouchure shows the panel in detail with an explanation of the controls. “Stop” has been airbrushed in, but the text wasn’t updated. And the ‘Breakpoint 2’ button has been replaced with 6-Bit Input. Operate & Standby to Operate have also been flip-flopped. 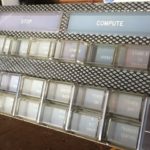 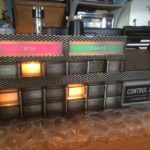 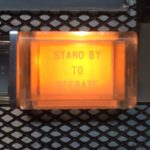 Feb 1: You’ll note in the S&F pic above that there are two milky-white plastic inserts that mount to the top cover of the machine and “extend” the styling of the panel. In most LGP-30 pics on the net, these are missing, as are mine. The reason is pretty simple; there’s around 1/4″ of play in the hinged top (it is designed to be removed, after all), yet the control panel itself is fixed to the frame. The plastic attaches with a couple of extruded tips, and if the top doesn’t come down exactly right, it’ll snap them clean off.

After a little sleuthing, I turned up some acrylic stock that’s just the right thickness, and pretty close in color to the panel door. Further work on that will have to wait until the mechanical work is finished. 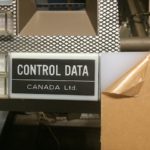 Update: The original panel has since been installed and adjusted (see pic at top). All seems to work correctly, though the scope tube (driven by the digital display unit) needs attention.